Scania VCI2 is the most popular diagnostic tool designed for maintenance and servicing of trucks, buses, other heavy vehicles and engines manufactured by Scania.

Scania VCI2 is a tool that is used together with Scania Diagnosis and Programmer 3 (SDP3) software to diagnose and troubleshoot Scania heavy vehicles and trucks. To work with the latest Scania vehicles a sophisticated vehicle communication interface (Scania VCI2) has been developed which talks to the car CAN-BUS network transferring all the vehicle data to the operative in real-time. Scania VCI2 is the best available tool for your Scania truck workshop. It’s a robust diagnostic system, and it allows you to make an in-depth diagnosis for all Scania vehicles. You’ll get all the information about vehicle electronics, hydraulic and pneumatic systems. 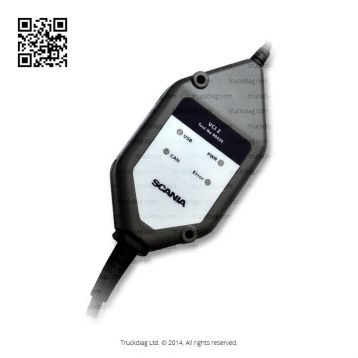 Attention! All our team will have holidays from 18th July to 15th August. Keep in mind that shipping of goods purchased in this period will be delayed. For more information, please get in touch with us by email. Dismiss